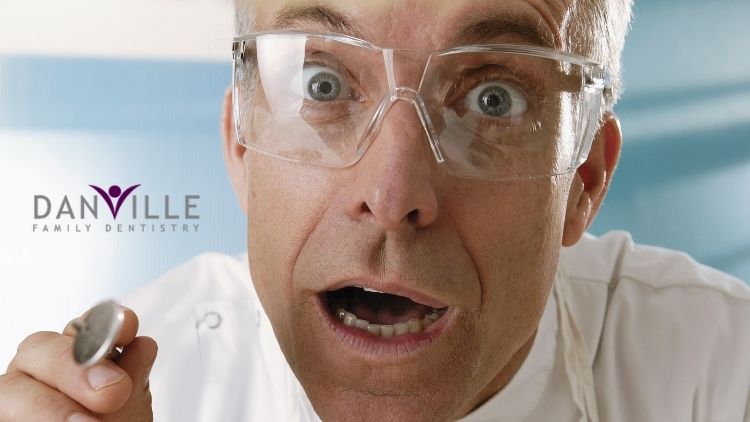 Widely regarded as the artists of the dental industry, dentists and dental technicians help create the perfect smiles most of us take for granted. But what dental professionals often don’t tell you are the shocking dental stories behind those perfect smiles. Dental professionals make a career out of creating and nurturing beautiful teeth but for every successful tooth extraction, there’s one that’s slightly unusual in some way.

The Fly in the Dental Exam

This wonderful tale is pulled from a forum where dental students contributed stories. A friend tells this story about a stressed dental assistant taking an extremely important practical exam. Let’s just say, because I can’t help myself, that she suffers a little “fly in the ointment.”

A dental assistant is taking the exam, which is graded by an observer and includes input from the student dentist. The doctor is working on an amalgam and the dental assistant is required to hand him instruments and materials he needs without him asking for them.

Suddenly, a Kamikaze fly lands dead on the patient’s tongue, stuck, upside down by the wings. This very nervous dental-assisting student who can’t make any mistakes, is annoyed to say the least. What is the proper instrument for removing a fly from a patient’s tongue? In a resourceful move, she picks up an amalgam carrier, sticks it into the doctor’s hands. The doctor scoops the bug up with the large end, hands it back and simply says, “That was correct.”

Lijana Wallenda, sister of the famous daring Wallenda Brothers has such strong teeth that she allowed herself to be flown by helicopter over Niagara Falls where she hung from a trapeze ring and then let go hanging only by her teeth!

“In the prehistoric days when my bosses at the time were still becoming accustomed to wearing gloves, I attended a gingivectomy (to watch and learn). The dentist removed what I now know to be an overkill of gingivae. Holding the quivering pink mass up with the hemostats, he ordered me to “take it”(with my ungloved hands)! He completely expected me to hold out a palm and let him deposit the tissue there! When I refused, he became extremely impatient and the other assistant ended up taking the specimen with a 2×2. Unreal! I still have a hard time believing that really happened…and yet it did.”- Sweetgal, Indeed.com

Last year, a 60-year-old Swedish woman was injured when a dental drill head came loose and dropped into her mouth. Providers rushed to sit the woman up immediately and tried to get her to cough up the drill head, but the inch-long piece had already fallen down her throat and lodged in her right lung, according to the Swedish news website, The Local. Doctors at Västmanland County Hospital, in Västerås, in central Sweden, performed an emergency surgery to remove the metal piece. The woman has since recovered.

Dentures of a Lifetime

“A patient once brought me a broken Vulcanite F/- to repair. I explained I could only use acrylic cold cure which wouldn’t make a great repair and mentioned after all these years maybe it was time for a new denture. Patient said he had managed to escape out of the back door of a French farmhouse as the Germans were coming in the front, but left his dentures on the mantelpiece. The army made him new dentures which he never got on with but three years later, when they were chasing the Germans out of France, he realized he was near the farmhouse. He went in, found his dentures where he had left them and exchanged them for his unsatisfactory army replacements!”- Chris Farrow

A 7 year old boy had an aching jaw for a very long time. When doctors took a look, it turned out that he had a tumor and inside – 500 teeth!

Santa Fe police this spring were looking for victims of an unlicensed tooth doctor, who worked as a mobile dentist out of a sedan around this New Mexico city. According to police, the man, Eliver Kestler, who was known as “El Dentista,” was arrested April 20 after a former customer turned him in. Kestler, 36, allegedly operated a portable drill machine and other dental equipment out of a small, red vehicle. Kestler told police he had a license to practice dentistry in Mexico, though not in the U.S. The moral of the story? Don’t get into a car with a strange man, particularly if he has a dental drill in it.

Driven to Extraction: The Story of a Prison Escape

This hilarious tale features a 51-year-old Swedish inmate who just couldn’t take his toothache any more, so he broke out of prison. According to a Huffington Post news story, the Swedish inmate broke out of prison because he wanted to go to the dentist. Talk about dedication to dental health! The man told news authorities that he had been complaining about the toothache for days and just could take it anymore even though he was scheduled to go the following day. The inmate turned himself in after being treated and apparently as a result, his one-month prison sentence was only extended one day.

The Guinness Book of World Records states that the world’s largest human tooth was found in Germany. It was pulled from a man’s mouth and the dentist spent 2 years filing the paperwork to receive the record. The tooth was 1.46 inches long!

“This old guy came in and his breath really, really smelled. The hygienist started flossing his teeth and started pulling out fur. Cat fur. And not just recent fur but years of compacted, rotting fur, hiding in his gums. She said she needed to take a few breaks during that cleaning.” – Anonymous, Reddit.com

At Danville Family Dentistry we help you to have a smile you can be proud of, no matter if it is a crazy situation like these or not! Contact us today!